The Biggest Wave in the World 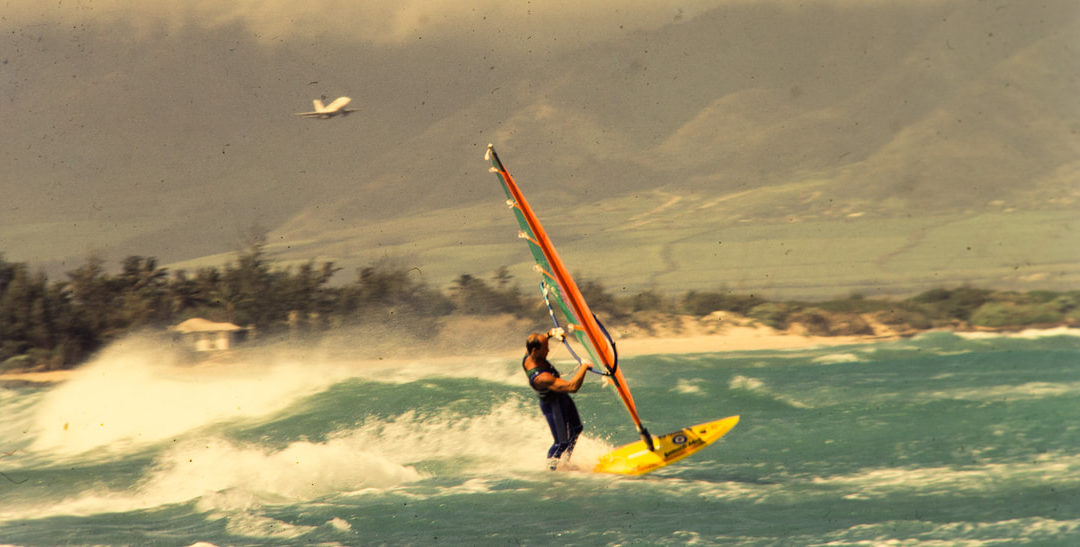 The Biggest Wave in the World

I had just set the windsurfing world speed record in 1983, breaking the 30-knot barrier in Weymouth, England, but that’s not how I made my name in the sport. My fame came on a day when I was surfing alone, thanks to an eccentric and very wealthy fellow windsurfer and cover photographer for such magazines as Vogue and Life, who showed up to watch me after everyone else had left the beach for the day.

Arnaud de Rosnay was cruising [where?] in his convertible when he stopped me on the street. He was dressed all in white, his long hair blowing in the breeze. Before the end of the year, the dashing and wealthy French baron would disappear attempting to windsurf across the South China Sea’s 100-mile Taiwan Strait. But on this particular blustery spring day in 1984, Arnaud was eager to photograph what he claimed would be the best day to surf the North Shore of Maui.

“Hey, Fred,” he called to me. “The biggest waves in the world will be coming in at Ho’okipa today. I’ll be there at noon with a helicopter to shoot it. Come sail at noon!”

“Yeah, I know,” I said to him. “But I’ll be there at three. I’m going to sail a really big wave at around four o’clock, maybe four-thirty.”

“But I’ll have the helicopter there at noon!” Arnaud insisted.

“I’ve been sailing every day,” I told him, “and every day the big waves have been coming late. The biggest set of the day will come around four. I don’t want to sail until it’s going to get really big. I think someone is going to ride the biggest wave in the world, and I want to be the one.”

It was an exciting time to be surfing on Maui. Matt Schweitzer, Mike Waltze, Pete Cabrinha, Dave Kalama, Laird Hamilton, and I were experimenting and innovating with our boards on the water. We weren’t the first to do anything, but we convinced those who were that Maui was the place to push their limits. They came. They pushed. And windsurfing took off, followed by big wave tow-in and paddle-in, SUP, kite sailing, and foil-boarding. Maui offered the stage to showcase the stars.

“But I will have a camera there at noon!” Arnaud repeated. “The helicopter is on the way there now to go in it.”

I have lived on Maui my whole life. I know the water. I know the waves. I knew Ho’okipa, a beach that offers some of the biggest challenges for board surfing in the world, but was pretty much a secret in the early ’80s.

I knew the tide that day would bring the biggest waves late in the afternoon.

So, we parted, and Arnaud headed over to Ho’okipa via helicopter.

I showed up at three o’clock to find a few guys still there: David Ezzy, Malte Simmer, Mike Eskimo, Craig Maisonville; so was the helicopter. I stood on the beach to watch Malte Simmer going up to face a wave, making a turn at the top and coming back down.

The waves were, indeed, huge. The faces were maybe forty or fifty feet—the hugest things I had ever seen. I started to second-guess myself. I wondered if I had misjudged the best time to be on the water.

I decided to try to catch the “biggest waves in the world” that must have come earlier that afternoon than I had expected. So I rigged up and tried to sail out on a 5.9-square-meter sail with a seventeen-foot mast–a big rig for my windsurf board.

I tried to sail out, but I had to go over whitewater, and a few threw me back. So, I just lay down on my board and swam out. It took me thirty minutes to go what should have taken me thirty seconds if I hadn’t kept getting blasted by the waves. I finally got out to where I should have been able to catch some action.

Then, suddenly, the wind just dropped. It was late. The wind tends to start blowing from land to sea at around four o’clock. I looked left and right, and I saw nobody. The helicopter was gone. Everyone had gone in.

“Okay. Oh, well,” I said to myself. I hadn’t come for the helicopter. I just wanted to surf the world’s biggest wave that day.

And then I did.

I waited about an hour for that wave. It wouldn’t come through. I took a few, but they weren’t that big. I kicked out to look for it.

And then I saw out in the distance, a mile or two away, one that was standing some twenty feet above the others. This was it. This was the tide change. The waves were breaking very far out—farther than I had seen them break before.

I was a couple of miles out, so I got up and started sailing back to the beach. By the time the wave caught me, I was hydroplaning. The wind was turning more offshore now, and I was going almost straight upwind. To drop in, I had to veer off to the right and slide across the wave.

Looking down from the top, I felt like that wave was six stories high. I took the power in my hands, and I zipped down the face. I ran out on the flap, trying to get in front of it. I didn’t know when it would break.

Then, with a twenty-five-foot wall of water in front of me, the wind stopped. The wave locked down all that offshore wind. I had nothing in my sail. I couldn’t sail into it, and I started to go up the face backward!

I wasn’t really going backward. It just felt like it, because this giant wave was lifting me and sucking me up the face. I didn’t know if it would land in front of me, behind me, or on top of me. I was strapped into my harness and vulnerable to serious injury if the wave hit me the wrong way. I was close to catastrophe.

All of a sudden, the lip of that wave came over and crashed right on my tail block. I almost ditched my rig, but I held on by my fingertips. I realized it didn’t hit me. There was whitewater all around me. I crawled up to grab the boom and managed to stand up. A moment later, I caught a blast of wind from the collapsing wave and started sailing. It took me all the way back to land and threw me onto the dirt bank at the back of the beach.

I lay there, taking it all in. I did it, I thought. And then, as if I had spoken out loud….

“You did it!” I heard someone hollering. “You surfed the biggest wave in the world!”

Of course, it was Arnaud. I looked up to see him running to me through the sand with his camera bouncing around his neck. Everyone else had left the beach. But not Arnaud. Arnaud was a real pro, both on the water and behind the lens. He will never miss the shot—or the wave.

“I got it!” he exclaimed. “I got it all on one wave. You are going to be famous! These pictures will make you even more famous than breaking the world record!”

Arnaud was right. I made the covers of all the top trade magazines. But the one that put me on the map was Life magazine. It was February of 1984, and Life was widely admired by a broad general audience for its photojournalism.

Arnaud’s photos of me won me a sponsorship with Neil Pryde Sales, launched my pro career in speed sailing, and generated some $70,000 a year for nearly a decade. Not bad for a boy who grew up on the beaches of Maui.

I sure appreciated the opportunities that career with its nice paychecks brought me. As exciting as it was to surf “the biggest wave in the world” and receive the accompanying acclaim, I never made a lot of it. Records will always be broken. Few people remember. The fanfare always dies down.

My life has been about living with passion, purpose, and a little aloha—on and off the water. My happiest times during those pioneering days were trying new tricks on the water, building better boards with my compadres at Sailboards Maui, and teaming up with the likes of Laird Hamilton and Mike Waltze to bring the best wave riders to Maui. Our motto was, “If you’re sitting at home, you’re not having fun!”

Those days surely were awesome. But nothing beat the challenge, the excitement, and the sheer fun of swimming with Mark Spitz when I was in high school.